Cognitive overload is a challenge IBM has worked since 2005, says @GinniRometty in @KaraSwisher interview @RecodeEvents. Thus, cognitive computing combining man and machine is more than artificial intelligence. Better decisions in open domains will lead to solving problems not solved before.

In T-shaped thinking, not just the jack-of-all-things of unstructured data + natural language + images, but the depth in domain knowledge to understand, reason and learn. If it’s digital, it will be cognitive. In education, reading and mechanical skills won’t be enough, will have to teach and learn data skills.

Blockchain could be even bigger than Watson, with opportunities in efficiencies in supply chains and capital flows. Open source will be important, the Hyperledger project gives transparency to regulators and institutions. 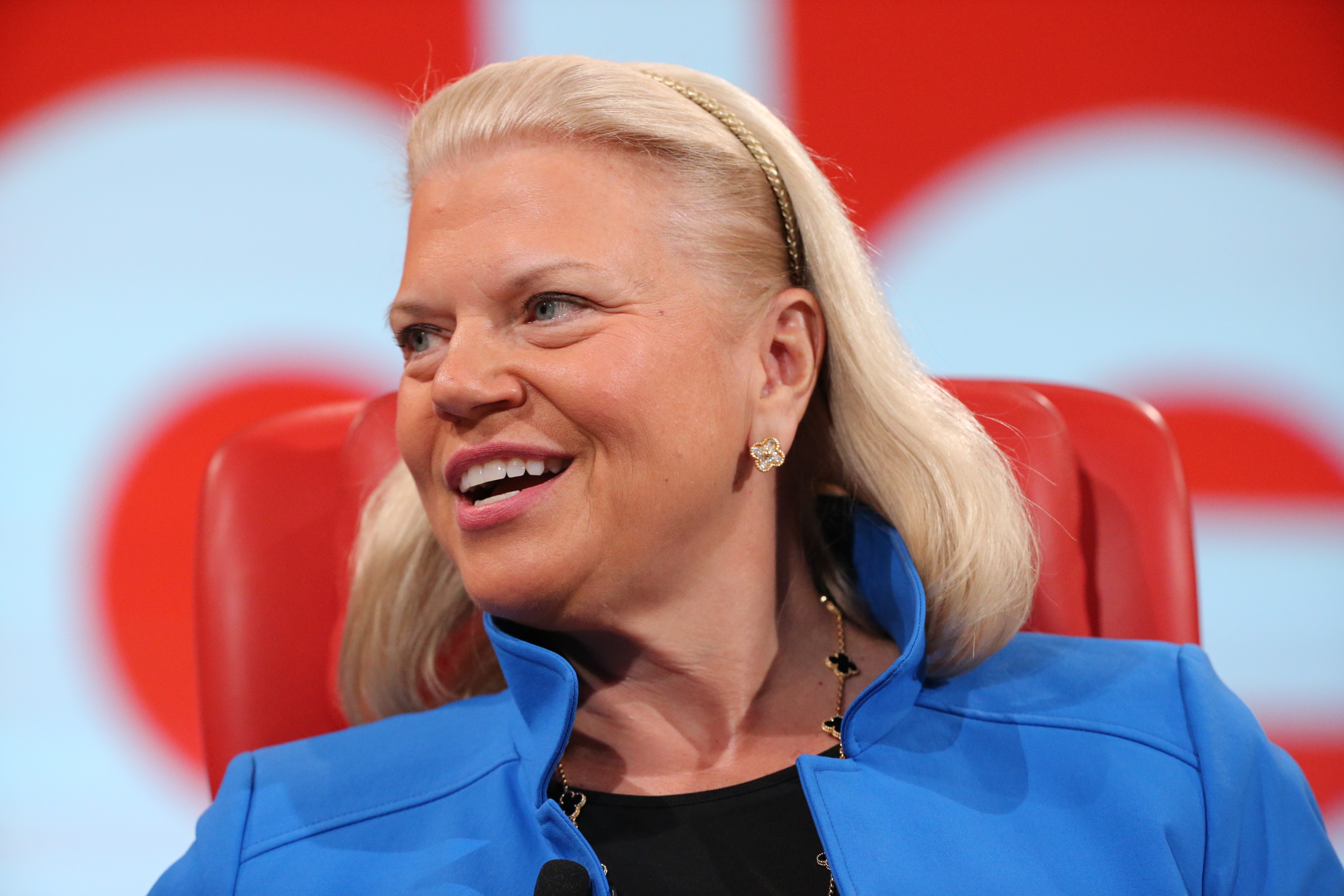 [The full video of 27m44s is online from recode.net.  A 4m19s excerpt is searchable on Youtube]

[5:00 Ginni Rometty] The reason we don’t call it artificial intelligence — which is much easier to say, by the way, and spell … I’ve heard this from everyone. It is a little bit of history. It’s really all about man and machine. And I know there are various views about this. And AI can have a loaded set of connotations with it.

[5:25 Kara Swisher]: About destroying the earth.

[5:26 Ginni Rometty]: More than that. Jobs, many other things that people bring up about that topic.

[5:31 Ginni Rometty]: The point was, it was man and machine. We got started on this, Kara, in 2005, when we started our work on this. We’ve been at this on for a good decade, now. And it started because we said, look, people are going to be overloaded. There’s so much information. It’s cognitive overload. You’ve got to do something about it. And that’s what started us down this path. And therefore, this really true belief that you will make better decisions, and you will in fact solve problems that haven’t been solved before.

[5:56 Ginni Rometty]: Which is why, good or bad, we picked the first thing with healthcare. It is the most … I would have to ask everyone … Does everyone think? There’s not even really a system around it, it’s so dysfunctional. There’s so much waste. 8 trillion, a third of it is waste.

[6:51 Ginni Rometty] And then Jeopardy. Because chess is really such a long time ago. And chess has many more — yes, you were thinking Jeopardy — because chess has many more mathematically determined …. That’s just horsepower, when you’re doing chess. But that’s not true with Jeopardy. Jeopardy is open domain, so it’s infinite answers. It’s a very different set of issues that are there.

[7:08 Ginni Rometty] When you say why, and can it be a business? This goes back to thinking that it could be an everyday, impact. I would say that in 5 years, there is no doubt in my mind, that cognitive AI will impact every decision made. 5 years. In some way, in some sense. It can be everyday stuff. And when you say, to make it a business, just look at healthcare, education, I look at what we’ve done in financial services, and I can see what clients are doing. [….]

[7:58] One thing that is important for everything thinking in the future of AI … a couple things. It’s easy to think about, okay, you’ll have to deal with unstructured data. Mary talked about natural language. But it’s not just that, and it’s not just images. It’s going to have to be domain knowledge, and that this ability to understand, reason and learn. And if you can do that in a domain, you’re in a way different world. It’s not like being a jack-of-trades on a really thin thing.

[8:25] This is going down the path, if you’re an oncologist, how can you look at an EMR, look at x-rays, look at the knowledge that has been printed out there, form hypotheses, decide your level of confidence … What experts want — what you and I want, when we want to make a decision … You don’t want to be told the answer. You want to see, here’s the different reasons, here’s how I thought about it, here’s the evidence that proves it. When you’re being treated for cancer, you may not want your hair to fall out. That may mean a lot to you. So there is no right or wrong answer.

[8:54] So I see this world … This is where we’ll going to want to deal with the grey area. And that is really a different business. And I think most businesses are there.

[9:07 Kara Swisher] Right now, you put cognitive businesses at $4 billion, about 20% of your business.

[9:30 Ginni Rometty] We don’t, for a reason. Anyone who’s building something … It’s going to be a silver thread …

[9:58 Ginni Rometty] If it’s digital, it’ll be cognitive. Anything you do digital, it will be cognitive. So, if you think that, you’re going to be a way that you really run your business. [….] We will solve things that haven’t been solved. [….]

[11:10] The other parts of the business, I say, they’re not growing, they’re declining. But, my, good, we run the railroads, the airlines, the banks of the world. Those are systems, by the way, that are to be changed. I hope we do do talk a little about systems like blockchain, which, I believe, as much as discussion as we have about AI, the blockchain will have as much as an influence on many different ways that businesses are run.

[16:40 Kara Swisher] That is the friendly view of AI. […] Your thing is not so much doing the why, you’re showing the path of decision-making. But at some point, two things could go wrong. One is replacing jobs. Completely replacing jobs. [….] The other one is evil in taking over the planet.

[17:30 Ginni Rometty] I think there are a couple points that you should think about. When you think about … I’ll keep using the word cognitive, because AI is a subset. For me as an engineer, technically, AI is a subset of cognitive. There are many more statistical engines in here, and what it does. But what really matters is who teaches these things. Watson is taught. When you come in, it’s both the data you use to teach, and who does the teaching. So, as an example …. This is why verticals become really important. So, when you’re in healthcare, IBM has been taught by the world’s greatest oncologists right now. [….]

[18:20] This idea of knowing which data to use for what …. If you are going to diagnose someone, would you go to the journals, and all of the literature of medicine, or would you go to Twitter? [….]

[18:57] Your other point though, is what about job? I think that is is inevitable. Things that are repetitive, they will have a job impact. That is foolish to say it won’t. We’re doing the work on radiology today. [….]

[19:29] The radiologist can do what he really should be doing, and that’s what he’s going to be putting the premium on. But this will circle back …. The root of this is going to go back to education. Because, you aren’t going to stop it. Mary had that chart up on transportation. The trend is going to keep moving, right?

[19:45] The chart on transportation …. If you go back to farming, people had to read. The industrial age, then they had to teach mechanical skills. I think what ever we’ll end up calling this age, people will have had to learn all of these data skills, right? [….] I do think that there will be tons more of jobs that will open up. But there will be this discontinuity period. They don’t always line up. That’s the thing about transitions.

[20:25 Kara Swisher] Last question, blockchain. Why do you think it’s going to be important?

[20:30 Ginni Rometty] How many people are familiar with blockchain? [….] How many of you think it’s going to have a profound impact on some of the biggest business processes in the world? I would say, maybe 60-70%.

[20:45] We have about 200 projects going. But, we did something else. And ghis is probably the most instructive. Cause blockchain for me …. Anything that is a supply chain, you can improve its efficiency. It doesn’t matter whether it’s a people supply chain, numbers ….

[21:08] IBM Global Financing is $40 billion, one of the world’s largest. So we’ve put up our own ledger on a shadow blockchain already. Very interesting. I place a lot of commercial paper. I start to place my own commercial paper. Some people don’t fit in that flow. The flow goes down, money’s shortened. I can see it happening already. I have a big services business. There’s lots of supply chain. People parts moving around. You have tons of people on both sides that are reconciling. Blockchain addresses it. I have banks, reconciliation, stock exchanges, not very liquid assets, trading. Big shippers, to big retailers. So, I can see the the efficiency. This is another area. It will be efficiency. Efficiency of capital flows, and efficiency ….

[21:55] It’s a great opportunity. You need two things to do it. You need transaction flows, and cryptography. And I also believe, it’s going to be important to be out in open source. We actually put the fabric for it, in Hyperledger. Because you will need visibility in the world. The regulators, the federal banks we worked with, you have to have it. I think — and we didn’t talk about it at all — I think that the opportunities are super-great around this. I see tons of little companies popping up, taking all different applications. I think it’s almost limitless what the ideas will be, what the people will do with this. In the good way that you’ll need to have transparency with this, and we’ll go through some learning. Again, some of the vehicles out there are not transparent, they’re opaque, you won’t be able to do that with financial transactions.

David Ing blogs at coevolving.com , photoblogs at daviding.com , and microblogs at http://ingbrief.wordpress.com . A profile appears at LinkedIn , and an independent description is on Wikipedia .

Translate
Beyond this media queue
This content is syndicated to Twitter. For professional perspectives, look to Coevolving Innovations; for a photoblog, look to Reflections, Distractions.
My Tweets

on Ing Brief
Contact
I welcome your e-mail. If you don't have my address, here's a contact page.
Social
Blogroll
Web Personas
Web sites
Feeds